The popular album is getting the Blu-ray audio treatment in November, and you can pre-order the disc now.

In an early announcement to retailers, Universal is preparing 'Tears for Fears: Songs from the Big Chair' for Blu-ray Audio on November 11.

Tears for Fears' biggest-selling album, 'Songs from the Big Chair' is now available in its most spectacular format. This Blu-ray Audio edition of the album includes newly remastered versions of classics songs like 'Everybody Wants To Rule the World,' 'Mother's Talk,' 'Shout' and 'Head over Heels,' and a 5.1 surround sound version of the album mixed by renowned musician and audio engineer Steven Wilson. Tears for Fears' phenomenal 10-million-selling second album marked a transition in the band's sound and catapulted them into international prominence and this set is a must for fans of the band and music in general.

Specs and supplements have not been detailed yet, but suggested list price for the Blu-ray Pure Audio disc is $29.98.

You can find the latest specs for 'Tears for Fears: Songs from the Big Chair' linked from our Blu-ray Release Schedule, where it's indexed under November 11. 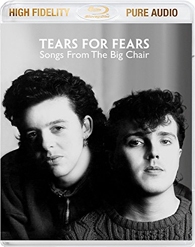 Discs mentioned in this article: (Click for specs and reviews)
Tears for Fears: Songs from the Big Chair (Blu-ray Audio) (Blu-ray)