Baltasar Kormákur's epic adventure to the top of the world is planned for Blu-ray and Blu-ray 3D this January.

In an early announcement to retailers, Universal is working on 'Everest' for Blu-ray and Blu-ray 3D on January 19.

Inspired by the incredible events surrounding an attempt to reach the summit of the world’s highest mountain, Everest documents the awe-inspiring journey of two different expeditions challenged beyond their limits by one of the fiercest snowstorms ever encountered by mankind. Their mettle tested by the harshest elements found on the planet, the climbers will face nearly impossible obstacles as a lifelong obsession becomes a breathtaking struggle for survival. Critics call Everest “… exciting, thrilling, moving, and completely engaging.” – Scott Mendelson, Forbes.

Each release will feature 1080p video, Dolby Atmos audio, and supplements include: RACE TO THE SUMMIT: THE MAKING OF EVEREST – The trials and tribulations of cast and crew as they journey to the foothills of Everest and beyond, battling the elements and forming deep bonds along the way; ASPIRING TO AUTHENTICITY: THE REAL STORY – Recollections of the tragic events of May 10, 1996, from those who were there, as the cast and filmmakers discuss bringing this harrowing tale to life with authenticity and respect; and FEATURE COMMENTARY WITH DIRECTOR BALTASAR KORMÁKUR.

Blu-ray exclusives include: LEARNING TO CLIMB: THE ACTOR’S JOURNEY – Cast members and the two film consultants who helped them prepare for the shoot discuss getting ready for the arduous production; and A MOUNTAIN OF WORK: RECREATING EVEREST – Bringing Everest to life required the filmmakers to recreate the mountain through state-of-the-art studio work and visual effects. The teams involved talk about how they made the seemingly impossible possible.

You can find the latest specs for 'Everest' linked from our Blu-ray Release Schedule, where it is indexed under January 19. 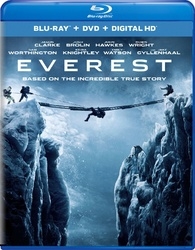 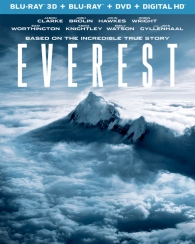