The first season of the fantasy drama arrives on Blu-ray in July.

In an early announcement to retailers, Universal has revealed 'The Magicians: Season One' will arrive on Blu-ray on July 19.

Based upon Lev Grossman's best-selling books, The Magicians stars Jason Ralph (A Most Violent Year, Aquarius) as Quentin Coldwater, a brilliant grad student who enrolls in Brakebills College for Magical Pedagogy, a secret upstate New York university specializing in magic. He and his 20-something friends soon discover that the magical fantasy world they read about as children is all too real— and poses grave danger to humanity. Stella Maeve (Chicago P.D.), Hale Appleman (Teeth), Arjun Gupta (Nurse Jackie) and Summer Bishil (Towelhead, Lucky 7) also star in this one hour drama.

Specs have yet to be revealed, but supplements include: Deleted Scenes, Gag Reel, and The World of The Magicians.

You can find the latest specs for 'The Magicians: Season One' linked from our Blu-ray Release Schedule, where it is indexed under July 19. 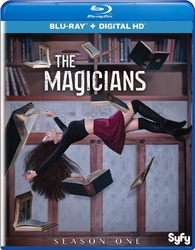