The first season of the Syfy series is heading to Blu-ray in April.

In an early announcement to retailers, Universal is preparing 'The Expanse: Season 1' for Blu-ray on April 5.

The Expanse is a thriller set two hundred years in the future, after mankind has colonized the solar system. A hardened detective (Thomas Jane, Hung) and a rogue ship's captain (Steven Strait, Magic City) come together for what starts as the case of a missing young woman and evolves into a race across the solar system to expose the greatest conspiracy in human history.

Specs have not been detailed yet, but supplements will include: Trailer and Deleted Scenes.

Suggested list price for the Blu-ray/Digital HD combo pack is $49.98.

You can find the latest specs for 'The Expanse: Season 1' linked from our Blu-ray Release Schedule, where it's indexed under April 5. 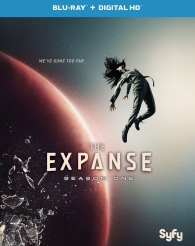 Discs mentioned in this article: (Click for specs and reviews)
The Expanse: Season 1 (Blu-ray)