Director Sarah Gavron's drama is heading to Blu-ray in February.

In an early announcement to retailers, Universal is preparing 'Suffragette' for Blu-ray on February 2.

A drama that tracks the story of the foot soldiers of the early feminist movement, women who were forced underground to pursue a dangerous game of cat and mouse with an increasingly brutal State. These women were not primarily from the genteel educated classes, they were working women who had seen peaceful protest achieve nothing. Radicalized and turning to violence as the only route to change, they were willing to lose everything in their fight for equality - their jobs, their homes, their children and their lives. Maud was one such foot soldier. The story of her fight for dignity is as gripping and visceral as any thriller, it is also heart-breaking and inspirational.

Specs have not been detailed yet, but supplements will include: Inside Suffragette; Suffragette: Looking Back, Looking Forward; Making the VFX for Suffragette; and Feature Commentary with Director Sarah Gavron and Screenwriter Abi Morgan.

You can find the latest specs for 'Suffragette' linked from our Blu-ray Release Schedule, where it's indexed under February 2. 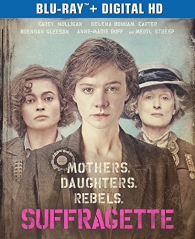 Discs mentioned in this article: (Click for specs and reviews)
Suffragette (Blu-ray)