Studio Ghibli's 'When Marnie Was There' Bound for Blu-ray

The animated drama directed by Hiromasa Yonebayashi is headed for Blu-ray in early October.

In an early announcement to retailers, Universal says 'When Marnie Was There' will arrive on Blu-ray on October 6.

When shy, artistic Anna moves to the seaside to live with her aunt and uncle, she stumbles upon an old mansion surrounded by marshes, and the mysterious young girl, Marnie, who lives there. The two girls instantly form a unique connection and friendship that blurs the lines between fantasy and reality. As the days go by, a nearly magnetic pull draws Anna back to the Marsh House again and again, and she begins to piece together the truth surrounding her strange new friend. Based on the beloved young adult novel by Joan G. Robinson and directed by Yonebayashi (The Secret World of Arrietty), the film is a haunting tale gorgeously rendered with its moonlit seascapes, glowing orchestral score, and powerful portrayals of friendship and belonging.

You can find the latest specs for 'When Marnie Was There' linked from our Blu-ray Release Schedule, where it is indexed under October 6. 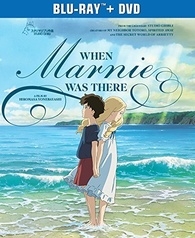