The 1991 anime film is being prepped for Blu-ray this July.

As previously reported, Universal will be releasing 'Only Yesterday' on Blu-ray later this year, and now the date has been set for July 5.

Okajima Taeko, a 27-year-old career woman, has never really felt that she fit in with everyone else. All her life, she's felt that something was missing, although she could never really figure out just what it was. Tired and bored with her current lifestyle, Taeko decides to take a ten-day vacation to her sister's husband's relatives' farm to help out with the safflower harvest. Recollections of events during her 5th grade year begin to resurface in Taeko's memory as she makes her trip and also while she helps with the harvest. As she remembers more and more, Taeko begins to come to a realization of what she has become as a result of some philosophies she first adopted in fifth grade -- and eventually is faced with an important decision concerning what she can do to change.

The Blu-ray/DVD combo pack will feature 1080p video, a lossless 2.0 soundtrack, and supplements include: Feature Length Storyboards; The Making of Only Yesterday; Behind the Scenes with the Voice Cast; Interview with the English Dub Team; Foreign Trailers and TV Spots; and U.S. Trailer.

You can find the latest specs for 'Only Yesterday' linked from our Blu-ray Release Schedule, where it is indexed under July 5. 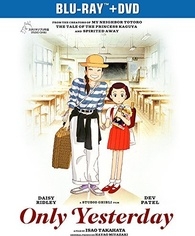