The 1993 anime film will be getting the Blu-ray treatment in April.

In an early announcement to retailers, Universal Studios is preparing 'Ocean Waves' for Blu-ray on April 18.

From the legendary Studio Ghibli, creators of Spirited Away, My Neighbor Totoro, and The Tale of The Princess Kaguya, comes a poignant and wonderfully nuanced story of adolescence and growing up. Taku and his best friend Yutaka are headed back to school for what looks like another uneventful year. But they soon find their friendship tested by the arrival of Rikako, a beautiful new transfer student from Tokyo whose attitude shifts wildly from flirty and flippant to melancholic. When Taku joins Rikako on a trip to Tokyo, the school erupts with rumors, and the three friends are forced to come to terms with their changing relationships. Never before released in North America, Ocean Waves is a beautifully animated adaptation of Saeko Himuro's best-selling novel, and a true discovery.

The Blu-ray/DVD combo pack will feature 1080p video, lossless 2.0 audio, and no supplements have been revealed at this time.

You can find the latest specs for 'Ocean Waves' linked from our Blu-ray Release Schedule, where it is indexed under April 18. 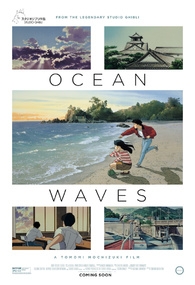