The PG-13 supernatural thriller is set to hit Blu-ray in February.

In an early announcement to retailers, Universal Studios is preparing to bring 'Ouija' to Blu-ray on February 3.

In Ouija, a group of friends must confront their most terrifying fears when they awaken the dark powers of an ancient spirit board.

The Blu-ray/DVD/Digital Copy will feature 1080p video, lossless 5.1 audio, and supplements will include The Spirit Board: An Evolution, Adapting the Fear, Icon of the Unknown.

You can find the latest specs for 'Ouija' linked from our Blu-ray Release Schedule, where it is indexed under February 3. 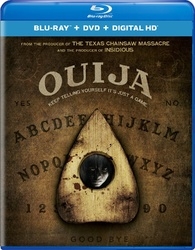