Steven Spielberg's 1979 comedy will get a separate Blu-ray release in May.

In an early announcement to retailers, Universal Studios will be releasing '1941' on Blu-ray on May 5.

Pandemonium erupts in Los Angeles after the WWII attack on Pearl Harbor in the wartime spoof, 1941, directed by Steven Spielberg. Starring Dan Aykroyd and John Belushi, this epic comedy soufflé features lavish special effects and screwball characters in an all-star extravaganza set on the streets of Hollywood. As hysterical Californians prepare for an imagined Japanese invasion, a motley crew of defenders attempt to guard their beloved palm-tree-lined coast.

The Blu-ray will feature 1080p video, a lossless 5.1 soundtrack, and supplements include: The Making of 1941, Deleted Scenes, Production Photographs, and Theatrical Trailers.

You can find the latest specs for '1941' linked from our Blu-ray Release Schedule, where it is indexed under May 5. 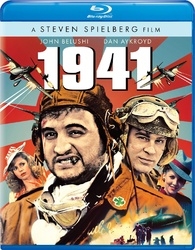