The classic epic will be available on Blu-ray sporting a new transfer minted from the recent 4K restoration this fall.

In an early announcement to retailers, Universal is preparing to unleash Spartacus: Restored Edition' on Blu-ray on October 6.

Specs have yet to be revealed, but supplements will include: I Am Spartacus: A Conversation with Kirk Douglas, Restoring Spartacus, Archival Interviews, Behind-The-Scenes Footage, Vintage Newsreels, Image Gallery, and Theatrical Trailer.

You can find the latest specs for 'Spartacus: Restored Edition' linked from our Blu-ray Release Schedule, where it is indexed under October 6. 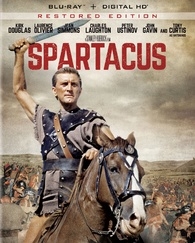