Both titles will be available on the 4K format this October.

In an early announcement to retailers, Universal is preparing 'Serenity' for 4K Ultra HD Blu-ray on October 17.

A passenger with a deadly secret. Six rebels on the run. An assassin in pursuit. When the renegade crew of Serenity agrees to hide a fugitive on their ship, they find themselves in an action-packed battle between the relentless military might of a totalitarian regime that will destroy anything — or anyone — to get the girl back and the bloodthirsty creatures who roam the uncharted areas of space. But, the greatest danger of all may be on their ship. From the mind of Joss Whedon (The Avengers, Firefly) comes an edge-of-your-seat adventure loaded with explosive battles, gripping special effects and fantastic new worlds!

'Apollo 13 4K' will also be available on the same date.

Nominated for nine Academy Awards, including Best Picture, Apollo 13 is the inspiring and riveting story of the real-life space flight that gripped the nation and changed the world. It had been less than a year since man first walked on the moon, but as far as the American public was concerned, Apollo 13 was just another "routine" space flight - until these infamous words pierced the immense void of space: "Houston, we have a problem." Produced by Brian Grazer and directed by Ron Howard, Apollo 13 stars Tom Hanks, Kevin Bacon, Bill Paxton, Gary Sinise and Ed Harris in NASA's epic operation to save the lives of 3 astronauts battling to survive an ill-fated mission to the moon.

The release will feature a DTS:X soundtrack and special features include: Feature Commentary with Jim and Marilyn Lovell; Feature Audio Commentary with Director Ron Howard; Apollo 13: Twenty Years Later; Lost Moon: The Triumph of Apollo 13; Conquering Space: The Moon and Beyond; Lucky 13: The Astronaut's Story; Theatrical Trailer; and U-Control Access.

Suggested retail price for each release is $29.98.

You can find the latest specs for 'Serenity 4K' and 'Apollo 13 4K' linked from our 4K UHD Blu-ray Release Schedule, where they are indexed under October 17. 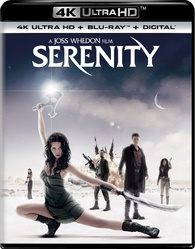 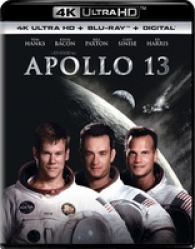