The film based on E. L. James’ best-selling novel arrives on Blu-ray in May.

In an early announcement to retailers, Universal Studios is set to release 'Fifty Shades of Grey' on Blu-ray on May 8.

The worldwide phenomenon comes to life in Fifty Shades of Grey, starring Dakota Johnson and Jamie Dornan in the iconic roles of Anastasia Steele and Christian Grey. Ana is an inexperienced college student tasked with interviewing enigmatic billionaire Christian Grey. But what starts as business quickly becomes an unconventional romance. Swept up in Christian's glamorous lifestyle, Ana soon finds another side to him as she discovers his secrets and explores her own dark desires. What results is a thrilling, all-consuming romance as Christian and Ana test the limits they will go to for their relationship.

The Blu-ray/DVD/Digital Copy Combo Pack will feature both the unrated and theatrical versions in 1080p with lossless 5.1 surround sound and supplements will include: The World of Fifty Shades of Grey—Friends and Family: Profiles of cast members including Eloise Mumford, Max Martini, Marcia Gay Harden, Luke Grimes, Jennifer Ehle, Victor Rasuk and Rita Ora; and Behind the Shades: Follow alongside director Sam Taylor-Johnson, producers E. L. James, Mike De Luca and Dana Brunetti, actors Jamie Dornan, Dakota Johnson and the rest of the cast through the making of the movie, including a candid discussion about the most challenging aspects of the story.

Blu-ray exclusives include: CHRISTIAN’S WARDROBE: A look into Christian’s wardrobe; ALL ABOUT ANA: Learn more about the Ana character; E.L. James & Fifty Shades: A chat with the creator of “Fifty Shades,” discussing the history of the novel and the experience making the film. Follow the author at the Premiere screening in New York and come full circle as the film is released to the fans; Fifty Shades: The Pleasure of Pain: A discussion with the BDSM consultant and a show-and-tell with property master; 360° Set Tours of Christian and Ana’s apartments including the Red Room; Music Videos from Skylar Grey, The Weeknd and Ellie Goulding; and Behind the Scenes of The Weekend’s “Earned It” Music Video.

You can find the latest specs for 'Fifty Shades of Grey' linked from our Blu-ray Release Schedule, where it is indexed under May 8. 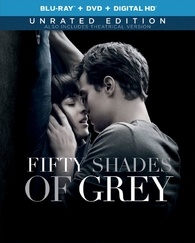