'Ride Along 2' Announced and Detailed for Blu-ray

The comedy sequel starring Kevin Hart and Ice Cube will park on Blu-ray in April.

In an early announcement to retailers, Universal is working on 'Ride Along 2' for Blu-ray on April 26.

Ben (Kevin Hart), a recently graduated police rookie, now aspires to be a detective like his soon-to-be brother-in-law, but James (Ice Cube) still doesn't think that he has what it takes for the job. He reluctantly takes Ben with him to follow up on a lead in Miami. Plans for a quick trip go awry when their unorthodox policing gets them into a compromising situation that threatens to derail a major case… and Ben's upcoming wedding day.

The Blu-ray will feature 1080p video, a lossless 5.1 soundtrack, and supplements include:

You can find the latest specs for 'Ride Along 2' linked from our Blu-ray Release Schedule, where it is indexed under April 26. 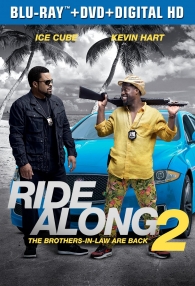