The true story of Errol Flynn's last romance is planned for Blu-ray in March.

In an early announcement to retailers, Universal will be releasing 'The Last of Robin Hood' on Blu-ray on March 3.

Errol Flynn (Kevin Kline), the swashbuckling Hollywood star and notorious ladies man, flouted convention all his life, but never more brazenly than in his last years when, swimming in vodka and unwilling to face his mortality, he undertook a liaison with an aspiring actress, Beverly Aadland (Dakota Fanning). The two had a high-flying affair that spanned the globe and was enabled by the girl's fame-obsessed mother, Florence (Susan Sarandon). It all came crashing to an end in October 1959, when events forced the relationship into the open, sparking an avalanche of publicity castigating Beverly and her mother – which only fed Florence's need to stay in the spotlight.

Supplements haven't been revealed yet, but the Blu-ray/DVD/Digital Copy Combo Pack will feature 1080p video and lossless 5.1 sound.

You can find the latest specs for 'The Last of Robin Hood' linked from our Blu-ray Release Schedule, where it is indexed under March 3. 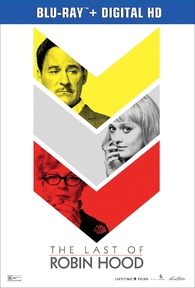