The drama is set to arrive on Blu-ray in February.

In an early announcement to retailers, Universal is working on 'Priceless' for Blu-ray on February 14.

Desperate and at a crossroads, James (Joel Smallbone) agrees to drive a box truck on a shady, one-time trip cross country for cash – no questions asked. But when he discovers what he is delivering is actually a who, James is compelled to help two frightened sisters who are unaware of the danger that awaits them in this inspiring tale of love, strength, and redemption.

The release will feature 1080p video, a lossless 5.1 soundtrack, and supplements include: Exclusive Performance by for KING & COUNTRY; The Making of Priceless; The Heart Behind the Film; The Official Trailer; and We Can Start Again - Ballad Trailer.

You can find the latest specs for 'Priceless' linked from our Blu-ray Release Schedule, where it is indexed under February 14. 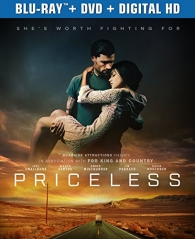