The Blu-ray set of three comedies directed by Hughes arrives in March.

In an early announcement to retailers, Universal Studios will be releasing 'John Hughes Yearbook Collection' on Blu-ray on March 10.

John Hughes was one of the most influential writers/directors of all time, creating an iconic portrait of 1980s teen life that helped define an entire generation. Experience some of his most memorable films in the John Hughes Yearbook Collection, showcasing three of his most beloved films ever made. Encounter teen angst in The Breakfast Club, teen love in Sixteen Candles, and raging teen hormones in Weird Science. Starring Brat Pack members Molly Ringwald, Anthony Michael Hall, Emilio Estevez, Judd Nelson and Ally Sheedy, these warm-hearted coming-of-age comedies are a true testament to the filmmaking genius of John Hughes.

Specs and supplements haven't been revealed yet, but the suggested list price for the Blu-ray set is $34.98.

You can find the latest specs for 'John Hughes Yearbook Collection' linked from our Blu-ray Release Schedule, where it is indexed under March 10. 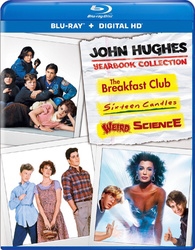