Oscar-Nominated 'My Life as a Zucchini' Announced for Blu-ray

The critically-acclaimed animated feature will be available on Blu-ray in May.

In an early announcement to retailers, Universal Studios says 'My Life as a Zucchini' will be available on May 23.

Nominated for an Academy Award for Best Animated Feature and beloved by audiences and critics alike, My Life as a Zucchini is a delightful and touching tale about the uplifting power of friendship in the face of adversity. After befriending a kind police officer, nine-year-old Zucchini is taken to a foster home filled with other orphans his age. Though he struggles to find his place at first, with the help of his new friends, Zucchini learns to trust and love again as he searches for a new family of his own. With a band of unforgettable characters you'll be cheering for, My Life as a Zucchini stands as a testament to the resilience of the human heart.

The combo pack will feature 1080p video, lossless 5.1 audio, and no supplements have been revealed at this time.

You can find the latest specs for 'My Life as a Zucchini' linked from our Blu-ray Release Schedule, where it is indexed under May 23. 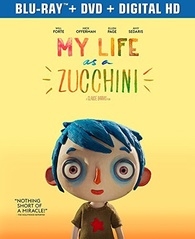