The thriller starring Joseph Gordon-Levitt is headed for high-definition in December.

In an early announcement to retailers, Universal is working on 'Snowden' for Blu-ray on December 20.

In 2013, NSA contractor Edward Snowden leaked a large number of classified documents to the media, exposing the U.S. government's covert surveillance activities. Some call the whistleblower a hero, while others call him a traitor. Spanning his time in the Army, the CIA and the NSA, Snowden uncovers the extent of the government's spying programs, coming to the realization that the public's understanding of privacy is far from the truth. His acts have been classified as treason and have made him one of the most wanted men in the world.

The Blu-ray will feature 1080p video, 5.1 audio, and supplements include: Finding the Truth and Snowden Q&A.

You can find the latest specs for 'Snowden' linked from our Blu-ray Release Schedule, where it is indexed under December 20. 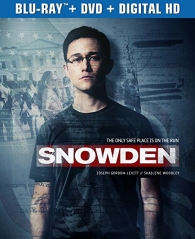