The comedy sequel will be available in stores since September.

In an early announcement to retailers, Universal is working on 'Neighbors 2: Sorority Rising' for Blu-ray on September 20.

Now that Mac (Seth Rogen) and Kelly Radner (Rose Byrne) have a second baby on the way, they are ready to make the final move into adulthood: the suburbs. But just as they thought they'd reclaimed the neighborhood and were safe to sell, they learn that the new occupants next door are a hard–partying, out-of-control sorority, led by Shelby (Chloe Grace Moretz). Mac and Kelly are forced to team up with their charismatic ex-neighbor and nowsecret weapon, Teddy (Zac Efron), since the ladies of Kappa Nu aren't going down without a fight. It's parenthood vs. sisterhood when the new neighbors assert their right to party just as hard as the boys.

Specs have yet to be revealed, but supplements include: Deleted Scenes; Gag Reel; Line-O-Rama; Nu Neighbors - Neighbors is back with a new direction and plenty of new cast members. Director Nick Stoller and Producers Seth Rogen and Evan Goldberg talk about their initial ideas for the Sorority Rising, the traps they avoided in making their first sequel, and the big differences between the first film and Neighbors 2; The Prodigal Bros Return - The not so beloved brothers of Delta Psi return... for a day. We hear from Dave Franco, Christopher Mintz-Plasse, Jerrod Carmichael and Zac Efron about their day on set while they catch us up on where they've been since the end of Neighbors; Girls Rule - Neighbors 2 has added a new threat to Mac and Kelly's household in the form of the Kappa Nu women. Learn more about the experiences of the new women on set; The Ultimate Tailgate - A behind-the-scenes look at the tailgate sequence; and Feature Commentary with Co-writer/director Nicholas Stoller and Producer James Weaver.

You can find the latest specs for 'Neighbors 2: Sorority Rising' linked from our Blu-ray Release Schedule, where it's indexed under September 20. 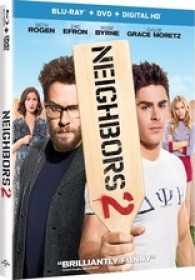