The comedy sequel will walk down Blu-ray's aisle next month.

In an early announcement to retailers, Universal will be releasing 'My Big Fat Greek Wedding 2' on Blu-ray on June 21.

Toula (Vardalos) and Ian (John Corbett, “Parenthood”) have raised their daughter Paris (Elena Kampouris, Men, Women, and Children) in the bosom of her extended Greek family. But the now 17-year-old is eager to set out on her own. When an unexpected wedding threatens to disrupt the clan’s delicate balance, it can either bring them all together or put them all at odds in a heartwarming family comedy as sweet as a slice of baklava.

The Blu-ray combo pack will feature 1080p video, a lossless 5.1 soundtrack, and supplements include: GAG REEL – Laugh along with the family as they make the film; MY BIG FAT GREEK DINNER – Grab a seat, fill a plate and share a family meal with the cast of My Big Fat Greek Wedding 2! Nia Vardalos, John Corbett, Joey Fatone, Ian Gomez, Lainie Kazan and Michael Constantine take part in a round-table retrospective shot inside the now famous Portokalos family restaurant, Dancing Zorbas. This featurette includes an in-depth look at the making of the film, the gargantuan success of its predecessor and how one doesn't have to be Greek to feel like a member of the Portokalos family; and MAKING THE GREEKQUEL – An inside look at the making of My Big Fat Greek Wedding 2 featuring on-set footage plus cast and crew interviews to show what it takes to bring a fan favorite back to life. Nia Vardalos, John Corbett, and cast members share some behind the scenes secrets, and Elena Kampouris and director Kirk Jones talk about working alongside the original cast as they shoot the follow up to the 2002 blockbuster.

You can find the latest specs for 'My Big Fat Greek Wedding 2' linked from our Blu-ray Release Schedule, where it is indexed under June 21. 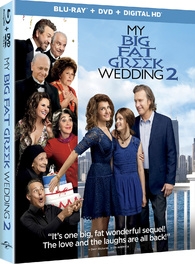