The second season of the critically-acclaimed series arrives on Blu-ray in January.

In an early announcement to retailers, Universal Studios has revealed 'Mr. Robot: Season Two' will be available on Blu-ray on January 10.

Winner of the Golden Globe for Best TV Drama, Mr. Robot follows Elliot Alderson (Golden Globe-nominee and Primetime Emmy Award winner Rami Malek), a young cyber-security engineer who becomes involved in the underground hacker group fsociety, after being recruited by their mysterious leader (Golden Globe-winner Christian Slater). Following the events of fsociety's 5/9 hack on multi-national company Evil Corp, the second season explores the consequences of that attack as well as the illusion of control.

The release will feature 1080p video, lossless 5.1 audio, and supplements include: Deleted Scenes; Careful.Massacre.of.the.Bourgeoisie.1984; and Behind_The_Mask_Mr_Robot_2.0.

You can find the latest specs for 'Mr. Robot: Season Two' linked from our Blu-ray Release Schedule, where it is indexed under January 10. 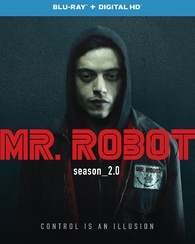