The animated feature film will be getting the high-definition treatment in March.

In an early announcement to retailers, Universal says 'Miss Hokusai' will arrive on Blu-ray on March 7.

As all of Edo flocks to see the work of famed artist Hokusai, his daughter O-Ei toils diligently, creating the paintings sold under her father's name. Shy in public, in the studio O-Ei is brash and uninhibited. Seeking to come into her own as an artist, O-Ei sets out into the bustling city of Edo (present-day Tokyo), where she encounters spirits, dragons, con men and traders.

The combo pack will feature 1080p video, lossless 5.1 audio, and supplements include a making-of documentary and trailers.

You can find the latest specs for 'Miss Hokusai' linked from our Blu-ray Release Schedule, where it is indexed under March 7. 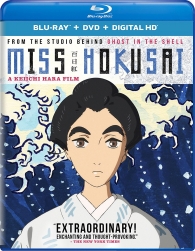