The horror film being summoned to Blu-ray in January has now been fully detailed.

As previously reported, Universal says 'Ouija: Origin of Evil' will be available on Blu-ray on January 17.

It was never just a game. Inviting audiences again into the lore of the spirit board, Ouija: Origin of Evil tells a terrifying new tale in 1967 Los Angeles. A widowed mother and her two daughters add a new stunt to bolster their séance scam business and unwittingly invite authentic evil into their home. When the youngest daughter is overtaken by the merciless spirit, this small family confronts unthinkable fears to save her and send her possessor back to the other side.

The release will feature 1080p video, lossless 5.1 audio, and supplements include: The Making of Ouija: Origin of Evil; Home Is Where the Horror Is; The Girl Behind Doris; and Feature Commentary with Director/Co-Writer/Editor Mike Flanagan.

You can find the latest specs for 'Ouija: Origin of Evil' linked from our Blu-ray Release Schedule, where it's indexed under January 17. 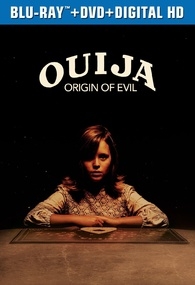