The intense crime thriller starring Chris Hemsworth arrives on Blu-ray in May.

As previously reported, Universal will be releasing 'Blackhat' on Blu-ray later this year, and now the date has been set for May 12.

Set within the world of global cybercrime, 'Blackhat' follows a furloughed convict and his American and Chinese partners as they hunt a high-level cybercrime network from Chicago to Los Angeles to Hong Kong to Jakarta.

The Blu-ray/DVD/Digital Copy Combo Pack will feature 1080p video, a lossless 5.1 soundtrack, and supplements include: The Cyber Threat, On Location Around the World, and Creating Reality.

You can find the latest specs for 'Blackhat' linked from our Blu-ray Release Schedule, where it's indexed under May 12. 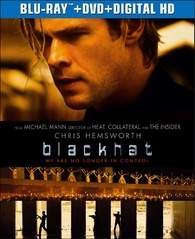