As previously reported, Universal is preparing to bring 'Kill the Messenger' to Blu-ray in the coming months, and now the date has been set for February 10.

Two-time Academy Award nominee Jeremy Renner (“The Bourne Legacy”) leads an all-star cast in a dramatic thriller based on the remarkable true story of Pulitzer Prize-winning journalist Gary Webb. Webb stumbles onto a story which leads to the shady origins of the men who started the crack epidemic on the nation’s streets…and further alleges that the CIA was aware of major dealers who were smuggling cocaine into the U.S., and using the profits to arm rebels fighting in Nicaragua.

The Blu-ray will feature 1080p video, a lossless 5.1 soundtrack, and supplements include: Feature Commentary with Director Michael Cuesta; Deleted Scenes with Optional Commentary by Cuesta; Kill the Messenger: The All-Star Cast; Crack in America; and Filming in Georgia.

You can find the latest specs for 'Kill the Messenger' linked from our Blu-ray Release Schedule, where it is indexed under February 10. 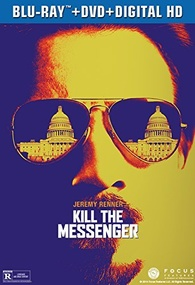