The sci-fi action flick is heading to Blu-ray in January.

In an early announcement to retailers, Universal is preparing 'Max Steel' for Blu-ray on January 10.

16-year-old Max McGrath is just trying to fit in at his new school when he discovers that his body can generate a mysterious energy. When he meets Steel—a rebellious techno-organic alien who has been secretly watching him—these two unlikely friends find themselves hunted, and must band together to form the superhero Max Steel to stop the sinister forces who want to control Max's power in this adventure of galactic proportions!

- Finding Max
- Imagining Steel
- Building the Suits
- Behind the Stunts

You can find the latest specs for 'Max Steel' linked from our Blu-ray Release Schedule, where it's indexed under January 10. 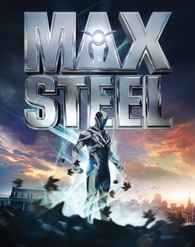 Discs mentioned in this article: (Click for specs and reviews)
Max Steel (Blu-ray)