The spoof flick is heading to Blu-ray in April.

As previously reported, Universal is preparing 'Fifty Shades of Black' for Blu-ray, and now the date has been set for April 19.

From Marlon Wayans, and the director of 'A Haunted House,' 'Fifty Shades Of Black' is an outrageous comedy starring Marlon Wayans in the role of Mr. Black. An inexperienced college student meets a wealthy businessman whose sexual practices put a strain on their relationship. In addition to Marlon Wayans, the movie stars Kali Hawk, Mike Epps, Andrew Bachelor, Affion Crockett, Jane Seymour, Fred Willard and Florence Henderson.

Specs have not been detailed yet, but supplements will include Meet Mr. Black.

You can find the latest specs for 'Fifty Shades of Black' linked from our Blu-ray Release Schedule, where it's indexed under April 19. 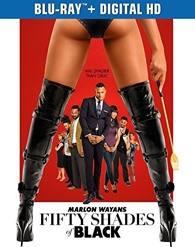