The suspenseful horror film will debut on Blu-ray in January.

In an early announcement to retailers, Universal is preparing to release 'The Visit' on Blu-ray on January 5.

When Becca and Tyler are sent to their grandparents' farm for a weeklong stay, they quickly discover something is not right with the elderly couple. Faced with strange rules and increasingly frightening behavior, the children soon realize it will take all their wits to make it home alive.

The Blu-ray will feature 1080p video, lossless 5.1 audio, and supplements will include: The Making of The Visit and Becca's Photos.

You can find the latest specs for 'The Visit' linked from our Blu-ray Release Schedule, where it is indexed under January 5. 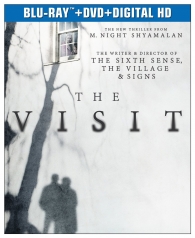