The horror/thriller is now up for pre-orders at Amazon.

In an early announcement to retailers, Universal Studios is working on 'Split' for Blu-ray later this year.

Writer/director/producer M. Night Shyamalan returns with an original thriller that delves into the mysterious recesses of one man’s fractured, gifted mind. Though Kevin (James McAvoy) has evidenced 23 personalities to his trusted psychiatrist, Dr. Fletcher (Betty Buckley), there remains one still submerged who is set to materialize and dominate all the others. Compelled to abduct three teenage girls led by the willful, observant Casey (Anya Taylor-Joy, The Witch), Kevin reaches a war for survival among all of those contained within him - as well as everyone around him - as the walls between his compartments shatter apart.

No other details haven't been revealed at this time.

You can find the latest specs for 'Split' linked from our Blu-ray Release Schedule, where it is indexed under PENDING. 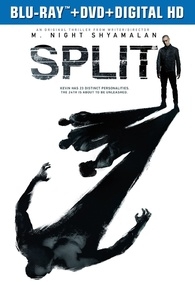