The horror/thriller is coming to home video in April.

As previously reported, Universal Studios is working on 'Split' for Blu-ray later this year, and now the date has been set for April 18.

Heralded as "one of his best films – period" (Alex Welch, IGN), M. Night Shyamalan returns to the screen with SPLIT. Kevin Crumb's (James McAvoy) fractured mind has revealed 23 personalities, but one remains dangerously submerged, set to materialize and dominate the others. McAvoy delivers "the role of his career" (Peter Debruge, Variety) as Kevin reaches a war for dominance among all those that rage within him, threatening his stability and impacting the survival of everyone around him.

Specs have yet to be revealed, but supplements include: Alternate Ending; Deleted Scenes; The Making of Split- Filmmakers, cast, and crew discuss what attracted them to the project and how they were able to bring such a unique premise to life; The Many Faces of James McAvoy- A look at how James McAvoy approached the challenge of playing so many different identities; and The Filmmaker's Eye: M. Night Shyamalan - Director and writer M. Night Shyamalan has a singular, big-picture vision of his projects. Producers, cast, and crew discuss how Night's process gives them the freedom to execute their roles to the fullest.

You can find the latest specs for 'Split' linked from our Blu-ray Release Schedule, where it is indexed under April 18. 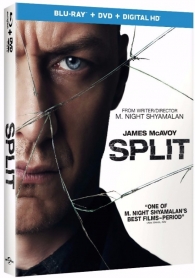