The action-packed science fiction thriller will arrive on Blu-ray in January. Pre-order here.

In an early announcement to retailers, Universal is preparing 'Lucy' for Blu-ray on January 20.

From La Femme Nikita and The Professional to The Fifth Element, filmmaker Luc Besson has created some of the toughest, most memorable female action heroes in cinematic history. Now, Besson directs Scarlett Johansson in Lucy, which tracks a woman accidentally caught in a dark deal who turns the tables on her captors and transforms into a merciless warrior evolved beyond human logic. Lucy also stars Academy Award winner Morgan Freeman and is produced by Virginie Besson-Silla for EuropaCorp.

The Blu-ray/DVD/Ultraviolet combo pack will feature 1080p video, a lossless 5.1 soundtrack, and supplements include: The Evolution of Lucy and Cerebral Capacity: The True Science of Lucy.

You can find the latest specs for 'Lucy' linked from our Blu-ray Release Schedule, where it is indexed under January 20. 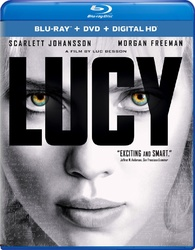