The intense chiller will debut on Blu-ray this August.

In an early announcement to retailers, Universal is preparing to bring 'Unfriended' to Blu-ray on August 11.

What starts as a seemingly innocent online prank produces a sequence of events that spirals out of control. During a routine group video chat, high-school friends are terrorized by an unseen figure. The anonymous intruder implicates each of them in the death of an acquaintance, revealing damning secrets and transforming trusted allies into wary adversaries. Forced into a sordid "game," the teens try to figure out who is behind the mysterious threat, but all signs point to a power from beyond the grave.

You can find the latest specs for 'Unfriended' linked from our Blu-ray Release Schedule, where it is indexed under August 11. 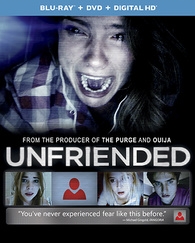