Brian Helgeland's crime drama is coming to Blu-ray in March.

In an early announcement to retailers, Universal is preparing 'Legend' for Blu-ray on March 1.

From Academy Award winner Brian Helgeland (L.A. Confidential) comes the true story of London's most notorious gangsters, twins Reggie and Ronnie Kray (Tom Hardy, Mad Max: Fury Road). As the brothers rise through the criminal underworld, Ronnie advances the family business with violence and intimidation while Reggie struggles to go legitimate for local girl Frances Shea (Emily Browning, Sucker Punch). In and out of prison, Ronnie's unpredictable tendencies and the slow disintegration of Reggie's marriage threaten to bring the brothers' empire tumbling to the ground.

The Blu-ray/Digital HD combo pack will feature 1080p video, a DTS-HD MA 7.1 soundtrack, and supplements will include: Creating the Legend; and Feature Commentary with Writer/Director Brian Helgeland.

You can find the latest specs for 'Legend' linked from our Blu-ray Release Schedule, where it's indexed under March 1. 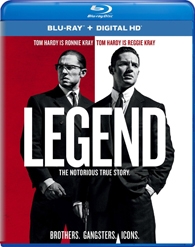