The 2017 drama starring Dennis Quaid and Britt Robertson will be available on home video this May.

In an early announcement to retailers, Universal is preparing on 'A Dog's Purpose' for Blu-ray on May 2.

A Dog's Purpose shares the soulful and surprising story of one devoted dog who finds the meaning of his own existence through the lives of the humans he teaches to laugh and love.

Specs have yet to be revealed, but supplements include: Deleted Scenes; Outtakes; A Writer's Purpose; and Lights, Camera, Woof!

You can find the latest specs for 'A Dog's Purpose' linked from our Blu-ray Release Schedule, where it is indexed under May 2. 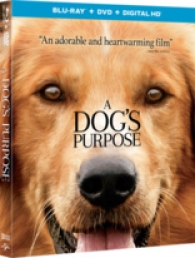