The second season of the science fiction adventure series will be available on Blu-ray in April.

In an early announcement to retailers, Universal says 'Killjoys: Season 2' will arrive on Blu-ray on April 18.

From the producers of Orphan Black (Temple Street Productions) and the creator of Lost Girl (Michelle Lovretta), Killjoys follows a fun-loving, hard living trio of interplanetary bounty hunters sworn to remain impartial as they chase deadly warrants throughout the Quad, a distant system on the brink of a bloody, multiplanetary class war. Starring Hannah John-Kamen, Aaron Ashmore, and Luke Macfarlane.

The galaxy's most bad-ass bounty hunters are back in Killjoys: Season Two. It's now up to Johnny and Dutch to rescue a kidnapped D'avin. As our trio continues to hunt deadly warrants threatening a bloody, multiplanetary war - they face old enemies, the tyrannical Company and the mysterious agenda of Khylen, Dutch's former mentor.

You can find the latest specs for 'Killjoys: Season 2' linked from our Blu-ray Release Schedule, where it is indexed under April 18. 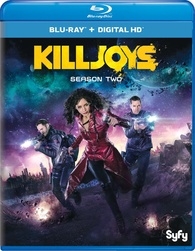