The first 10 episodes of the Canadian Syfy series is planned for Blu-ray in May.

In an early announcement to retailers, 20th Century Fox will be releasing 'Killjoys: Season 1' on Blu-ray on May 10.

From the producers of Orphan Black and the creator of Lost Girl comes Killjoys, a sci-fi adventure that follows a fun-loving, hard living trio of interplanetary bounty hunters (a.k.a. Killjoys) sworn to remain impartial as they chase deadly warrants around the Quad, a system of planets on the brink of revolution. A motley crew that always has each other's back, until a dark secret threatens to tear apart their trio for good. Follow their adventures and discover their secrets with all 10 episodes back-to-back and uninterrupted.

You can find the latest specs for 'Killjoys: Season 1' linked from our Blu-ray Release Schedule, where it is indexed under May 10. 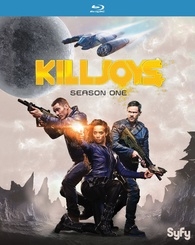