The coming-of-age film is heading to Blu-ray in December.

In an early announcement to retailers, Universal is preparing 'Kicks' for Blu-ray on December 6.

15-year-old Brandon longs for a pair of the freshest sneakers that money can buy to help him escape the reality of being poor and picked on by everyone. Working hard to get them, he soon finds that the titular shoes have instead made him a target after they are promptly snatched by a local hood. Brandon and his two best friends embark on a dangerous and exciting journey where nothing is as simple as it seems in this unique and memorable coming-of-age story.

The Blu-ray will feature 1080p video, a DTS-HD MA  5.1 soundtrack, and supplements will include:

- One on One
- Photo Gallery

You can find the latest specs for 'Kicks' linked from our Blu-ray Release Schedule, where it's indexed under December 6. 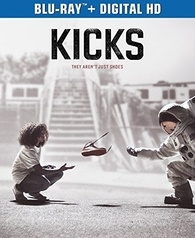 Discs mentioned in this article: (Click for specs and reviews)
Kicks (Blu-ray)