Kevin Bacon Wants His 'Cop Car' Back on Blu-ray

The crime thriller will pull over Blu-ray this September.

In an early announcement to retailers, Universal says 'Cop Car' will hit Blu-ray on September 29.

When a pair of 10-year-olds find an abandoned cop car in a field and take it for a joyride, it seems like they could kill themselves at any moment. But things only get worse when the small-town sheriff goes looking for his missing car—and the illicit cargo he left in the trunk—and the kids find themselves at the center of a deadly game of cat and mouse they don’t understand. The only way out is to go as fast as their cop car can take them.

The Blu-ray will feature 1080p video, lossless 5.1 audio, and supplements include: Their First and Last Ride: The Making of Cop Car.

You can find the latest specs for 'Cop Car' linked from our Blu-ray Release Schedule, where it is indexed under September 29. 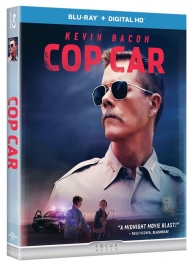