Jordan Peele's 'Get Out' Dated and Detailed for Blu-ray

The critically-acclaimed horror film is set to arrive on home video at the end of May.

As previously reported, Universal Studios is preparing 'Get Out' for Blu-ray later this year, and now the date has been set for May 23.

Now that Chris (Daniel Kaluuya, Sicario) and his girlfriend, Rose (Allison Williams, Girls), have reached the meet-the-parents milestone of dating, she invites him for a weekend getaway in her parent’s home upstate. At first, Chris reads the family’s overly accommodating behavior as nervous attempts to deal with their daughter’s interracial relationship, but as the weekend progresses, a series of increasingly disturbing discoveries lead him to a truth that he could have never imagined.

You can find the latest specs for 'Get Out' linked from our Blu-ray Release Schedule, where it is indexed under May 23. 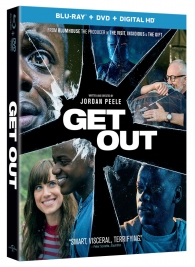