The Emmy winner's directorial debut arrives on Blu-ray next month.

In an early announcement to retailers, Universal Studios is preparing to bring 'Rosewater' to Blu-ray on February 10.

Based on Then They Came For Me: A Family’s Story Of Love, Captivity, and Survival, the best-selling memoir by Maziar Bahari and Aimee Molloy, Rosewater follows the Tehran-born, Canada-based Bahari as the journalist returns to Iran to interview Mir-Hossein Mousavi, challenger to Mahmoud Ahmadinejad in the country’s contentious 2009 presidential election. As Mousavi’s supporters were protesting Ahmadinejad’s victory declaration even before the polls closed, Bahari endured personal risk by sending footage of the street riots to the BBC. For this, Bahari was arrested by police led by a man known only as “Rosewater.” He was tortured and interrogated over the next 118 days, while his wife embarked on an international campaign to have her husband freed and media outlets kept the story alive.

The Blu-ray will feature 1080p video, a lossless 5.1 soundtrack, and supplements will include: Iran’s Controversial Election, The Story of Maziar Bahari, Real Spies Have TV Shows, What Happens in New Jersey..., and A Director’s Perspective.

You can find the latest specs for 'Rosewater' linked from our Blu-ray Release Schedule, where it is indexed under February 10. 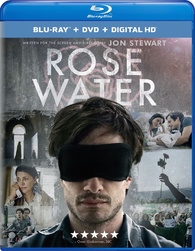