The rock and roll fashionistas are headed to Blu-ray in January.

In an early announcement to retailers, Universal says 'Jem and the Holograms' will be released on Blu-ray on January 19.

Small-town girl Jerrica (Aubrey Peeples, TV's Nashville) lives an unexceptional life…until she takes on a secret identity inspired by her music. She becomes Jem: the bold, stunning and absolutely fearless global superstar! But when it seems that she may lose touch with the things that really matter, Jerrica and her band of sisters begin a one-in-a-million journey, discovering that some talents are too special to keep hidden. Directed by Jon M. Chu (Step Up franchise) and starring Juliette Lewis (TV's Secrets and Lies) and Molly Ringwald (TV's The Secret Life of the American Teenager), Jem and the Holograms is a fun, music-filled, inspirational adventure about finding your own voice.

Specs have yet to be revealed, but supplements include: Gag Reel; "Youngblood" Music Video; Glam, Glitter, Fashion, and Fame: The Reinvention of Jem; and Feature Commentary with Producer/Director Jon M. Chu.

You can find the latest specs for 'Jem and the Holograms' linked from our Blu-ray Release Schedule, where it is indexed under January 19. 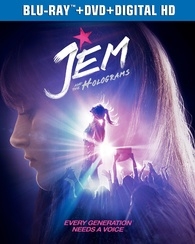