The classic horror/comedy will be getting a new transfer this September.

In an early announcement to retailers, Universal is set to release 'An American Werewolf in London: 35th Anniversary Edition' on Blu-ray on September 27.

Blending the macabre with a wicked sense of humor, director John Landis (National Lampoon's Animal House) delivers a contemporary take on the classic werewolf tale in this story of two American tourists who, while traveling in London, find their lives changed forever when a vicious wolf attacks them during a full moon. Starring David Naughton, Griffin Dunne and Jenny Agutter, An American Werewolf in London is newly restored and features groundbreaking, Academy Award winning make-up by Rick Baker (The Wolfman; Michael Jackson's Thriller Music Video).

The Blu-ray will feature a new transfer, although supplements from the previous release, and an exclusive sleeve.

You can find the latest specs for 'An American Werewolf in London: 35th Anniversary Edition' linked from our Blu-ray Release Schedule, where it is indexed under September 27. 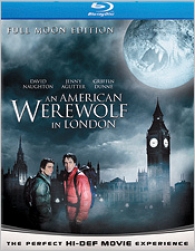