The star-studded crime thriller heads to Blu-ray in May.

In an early announcement to retailers, Universal will be releasing 'Triple 9' on Blu-ray on May 31.

In Triple 9, a crew of dirty cops is blackmailed by the Russian mob to execute a virtually impossible heist. The only way to pull it off is to manufacture a 999, police code for "officer down". Their plan is turned upside down when the unsuspecting rookie they set up to die foils the attack, triggering a breakneck, action-packed finale filled with double-crosses, greed and revenge.

The Blu-ray will feature 1080p video, lossless 5.1 audio, and supplements include: Deleted Scenes; Under the Gun – The acclaimed cast of Triple 9 offers an in-depth look at its characters and the pulse-pounding twists and turns at the heart of the film; and Authentic World – Director John Hillcoat and the cast of Triple 9 discuss how their grounded approach to filmmaking helped highlight the film's gritty, authentic look and feel.

You can find the latest specs for 'Triple 9' linked from our Blu-ray Release Schedule, where it is indexed under May 31. 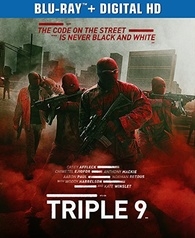