The star-studded zombie film will arrive on Blu-ray in September.

Universal is set to release The Dead Don't Die on Blu-ray on September 10.

It's the greatest zombie cast ever disassembled starring Bill Murray, Adam Driver, Tilda Swinton, Chloë Sevigny, Steve Buscemi, Danny Glover, Caleb Landry Jones, Rosie Perez, Iggy Pop, Sara Driver, RZA, Selena Gomez, Carol Kane, Austin Butler, Luka Sabbat and Tom Waits. In the sleepy small town of Centerville, something is not quite right. The moon hangs large and low in the sky, the hours of daylight are becoming unpredictable and animals are beginning to exhibit unusual behavior. No one foresees the strangest and most dangerous repercussion that will soon start plaguing the town: The Dead Don't Die – they rise from their graves and savagely attack and feast on the living – and the citizens must battle for their survival.

The Blu-ray will feature 1080p video, a lossless 5.1 soundtrack, and supplements include three featurettes (Behind the Scenes of The Dead Don't Die, Bill Murray: Zombie Hunting Action Star, and Stick Together).

You can find the latest specs for The Dead Don't Die linked from our Blu-ray Release Schedule, where it is indexed under September 10. 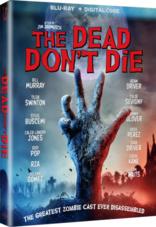