The drama starring Adam Driver will arrive on Blu-ray in April.

In an early announcement to retailers, Universal is preparing 'Paterson' for Blu-ray on April 4.

Paterson (Adam Driver) is a bus driver in the city of Paterson, New Jersey - they share the name. Every day, he adheres to a simple routine of driving his daily route, where he observes the city as it drifts across his windshield, overhearing fragments of the conversations that swirl around him. He writes poetry into a notebook, walks his dog, and has exactly one beer at a local bar. By contrast, his loving wife Laura (Golshifteh Farahani), is a dreamer who is constantly inspired by new ideas and ambitious projects, all the while championing Paterson's gift for poetry. The history and energy of the City of Paterson is a felt presence in the film and its simple structure unfolds over the course of a single week. In this "wise, winning… and moving" (Vanity Fair) film from acclaimed director Jim Jarmusch, the quiet triumphs and defeats of daily life are observed, along with the poetry that's evident in its smallest details.

You can find the latest specs for 'Paterson' linked from our Blu-ray Release Schedule, where it's indexed under April 4. 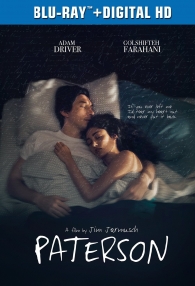 Discs mentioned in this article: (Click for specs and reviews)
Paterson (Blu-ray)