The thriller will be available in stores at the end of April.

In an early announcement to retailers, Universal Studios will be releasing 'The Boy Next Door' on Blu-ray on April 28.

Jennifer Lopez leads the cast in The Boy Next Door, a psychological thriller that explores a forbidden attraction that goes much too far. Scripted by Barbara Curry, The Boy Next Door is produced by Jason Blum of Blumhouse Productions, Lopez and Elaine Goldsmith-Thomas of Nuyorican Productions, Benny Medina of The Medina Company and John Jacobs of Smart Entertainment.

The Blu-ray will feature 1080p of video, a DTS-HD Master Audio 5.1 soundtrack, and supplements include: Deleted Scenes and The Making of The Boy Next Door.

You can find the latest specs for 'The Boy Next Door' linked from our Blu-ray Release Schedule, where it is indexed under April 28. 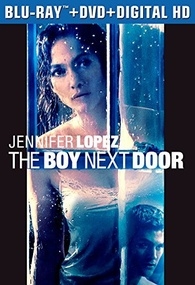