The period drama starring Joel Edgerton and Ruth Negga is headed for a Blu-ray in February.

In an early announcement to retailers, Universal says 'Loving' will hit Blu-ray on February 7.

From acclaimed writer/director Jeff Nichols, Loving celebrates the real-life courage and commitment of an interracial couple, Richard and Mildred Loving (Joel Edgerton and Ruth Negga), who married and then spent the next nine years fighting for the right to live as a family in their hometown. Their civil rights case, Loving v. Virginia, went all the way to the Supreme Court, which in 1967 reaffirmed the very foundation of the right to marry – and their love story has become an inspiration to couples ever since.

You can find the latest specs for 'Loving' linked from our Blu-ray Release Schedule, where it is indexed under February 7. 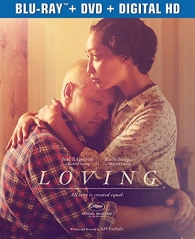