The film starring Bryan Cranston (in his Oscar-nominated role) and Diane Lane will be available on Blu-ray next month.

In an early announcement to retailers, Universal is preparing to bring 'Trumbo' to Blu-ray on February 16.

In 1947, Dalton Trumbo (Bryan Cranston) was Hollywood's top screenwriter until he and other artists were jailed and blacklisted for their political beliefs. Trumbo (directed by Jay Roach) recounts how Dalton used words and wit to win two Academy Awards and expose the absurdity and injustice of the blacklist, which entangled everyone from gossip columnist Hedda Hopper (Helen Mirren) to John Wayne, Kirk Douglas and Otto Preminger.

“A rousing and upbeat tale of rebellious film-making spirits with lively comedy notes,” according to Ben Child, The Guardian, Trumbo is a critically acclaimed film, nominated for an Academy Award® for Best Actor (Bryan Cranston), as well as two Golden Globes®, three SAG Awards, and three Critics Choice Awards.

Specs haven't been revealed yet, but supplements include: Bryan Cranston Becomes Trumbo and Who is Trumbo?

You can find the latest specs for 'Trumbo' linked from our Blu-ray Release Schedule, where it is indexed under February 16. 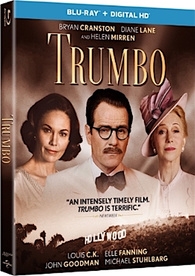