We're gonna need a much bigger boat this June.

In an early announcement to retailers, Universal will be releasing 'Jaws 2,' 'Jaws 3,' and 'Jaws: The Revenge' on Blu-ray on June 14.

'Jaws 2' - The horror is far from over as Roy Scheider, Lorraine Gary and Murray Hamilton reprise their iconic roles in Jaws 2. Four years after the great white shark terrorized the small resort of Amity, unsuspecting vacationers begin disappearing in an all-too-familiar fashion. Police Chief Brody (Scheider) finds himself in a race against time when a new shark attacks ten sailboats manned by teenagers, including his own two sons. The same heart-stopping suspense and gripping adventure that enthralled movie audiences throughout the world in Jaws returns in this worthy sequel to the original motion picture classic. Directed by Jeannot Szwarc and starring Roy Scheider, Lorraine Gary, Murray Hamilton, Joseph Mascolo, and Mark Gruner.

Specs have yet to be revealed, but supplements include: Deleted Scenes; The Making of Jaws 2; Jaws 2: A Portrait by Actor Keith Gordon; John Williams: The Music of Jaws 2; The "French" Joke; Storyboards; and Theatrical Trailer.

The release will include Jaws 3 in 3D as well as the Theatrical Trailer.

'Jaws: The Revenge' - Ellen Brody still lives in the island resort town of Amity, and her sons Sean and Michael don't work at Sea World anymore, and some time ago, Ellen's husband Martin Brody died of a heart attack that happened because he was afraid of sharks. Sean is now a deputy in Amity. One night, during the Christmas season, Sean is called to untangle a log from a buoy, and when Sean goes to the buoy, he's killed by a great white shark. Directed by Joseph Sargent and starring Lorraine Gary, Michael Caine, Mario Van Peebles, Lance Guest, and Karen Young.

The Blu-ray will include the original trailer.

You can find the latest specs for 'Jaws 2,' 'Jaws 3,' and 'Jaws: The Revenge' linked from our Blu-ray Release Schedule, where they are indexed under June 14. 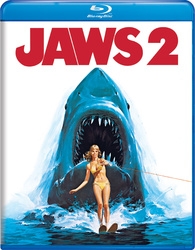 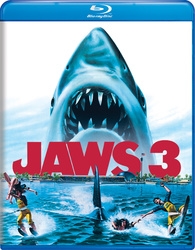 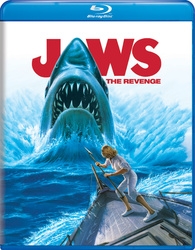